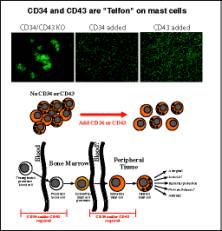 We are focusing on the regulatory mechanisms that govern mast cell and eosinophil production. These are relatively rare cells that are responsible for most of the pathology in chronic allergy and asthma and therefore may represent good targets for clinical intervention. We are using a number of transgenic mouse models to identify the factors that govern mast cell and eosinophil formation, homing and function and to perturb these processes during normal development.

We have focused predominantly on CD34-type proteins. CD34 is a cell surface sialomucin and the most widely used marker of hematopoietic stem cells and vascular endothelia. Recently we identified two novel receptors, Podocalyxin (also called Podxl, GCTM2, MEP21, gp135, Thrombomucin and PCLP1) and Endoglycan (Podxl2) that are also expressed by hematopoietic stem/progenitor cells and vasculature. We have shown that, together with CD34, these additional molecules comprise a gene family and that all three are probably derived from a common ancestral gene. Surprisingly, despite the extensive use of CD34 as a stem cell marker, virtually nothing is known of its function and it has alternatively be touted as a(n):

Targeted deletion of the CD34 gene in mice has only fueled the debate concerning its function since these mice exhibit extremely subtle perturbations in normal hematopoietic function that could be used to support each of the above hypotheses.

The discovery of two novel members of this gene family with overlapping expression patterns, has allowed us to: (1) re-evaluate these results in light of the potential for functional compensation and, (2) to generate compound mutant mice to test the true function of these receptors. In aggregate, these studies have allowed us to prove that the CD34 family of proteins function predominantly as anti-adhesion molecules, or “molecular Teflon”. Thus, they enhance the mobility and invasiveness of hematopoietic cells and on non-hematopoietic cells they are able to disrupt cell-cell junctional complexes between neighboring adherent cells (vascular endothelia or podocytes in the kidney, for example). This is not a constitutive function, but is tightly regulated by a set of proteins that bind to the cytoplasmic tail of CD34-type proteins and regulate their subcellular localization and proximity to adhesion molecules. Preliminary data suggest that loss of CD34-type proteins leads to defects in hematopoietic function by preventing the HSC from entering the appropriate microenvironments (due to excessive adhesion). Similarly, CD34, itself, aids in the trafficking of mucosal inflammatory cells (mainly eosinophils and mast cells) and mice lacking CD34 are remarkably resistant to a variety of inflammatory diseases. On endothelial cells we find that these proteins can regulate polarity, cell-cell adhesion and vascular permeability. Finally, we have shown that these same “anti-adhesion” molecules are upregulated in an aggressive subset of epithelial tumors and lead to increased invasiveness and loss of cell polarity. They may, thus, prove to be excellent prognostic indicators of poor outcome tumors and provide a means of identifying these cancers early for aggressive therapy.

Kidney Function and Cell Based Therapy

Through our studies of stem cell, podocalyxin and it role in kidney morphogenesis we have developed a long-term interest in the causes of chronic kidney disease and therapeutic approaches to treating this extremely important malady. Through a key collaboration with Dr. Beno Freedman at the U. of Washington we are exploring the utility of kidney organoids derived from human induced pluripotent stem cell (iPSC) as tools for identifying novel strategies for treating renal failure.