Our research has two major themes both of which concern major classes of proteins secreted by the immune system, cytokines and antibodies.

Antibodies are unique proteins encoded by millions of genes which are made and mutated in our body. The slight differences in structure between antibodies enable them to bind specifically to different targets. The number of different antibodies in each of our personal “repertoire ” of antibodies is enormous, meaning that each of us is likely to make antibodies that can bind any toxin, virus or bacterium. When we encounter a virus for the first time, even a “new’ one like “bird flu”, we will make greatly amplify the production of that specific type of antibody, meaning that –if we recover from that initial infection- we will be immune to that virus. We are exploring the idea that our ability to make antibodies specific for some common viruses or bacteria may not be dependent on us being lucky enough to make by chance an antibody that protected against that microbe. Instead we suspect that our genes have hard-wired us to make antibodies that protect us against common microbes. To study human antibodies, we use a novel technique we have developed to copy human antibodies as “monoclonal” antibodies. “Monoclonal” antibodies are the fastest growing class of new drugs and have provided breakthrough treatments for arthritis, cancer and other diseases. Therefore we are also studying how human monoclonal antibodies can be exploited as research tools or novel therapeutic agents. Our research on antibodies is directly relevant to combating two important human pathogens, human cytolomegalovirus (HCMV), a virus that is an important cause of birth defects, and the pneumococcus, which is a common cause of death from pneumonia. We are also exploring the use of human monoclonal antibodies to treat arthritis or cancer.

Cytokines are hormone-like secreted proteins that are normally produced only when the body is invaded by microorganisms or suffers damage, for example as result of trauma. Cytokines orchestrate the immune response, mobilizing the white blood cells that attack invaders by increasing the production of blood cells, readying them for action and ensuring that they congregate at the site of infection or damage. We have studied the biochemical signals that cytokines make in cells. Our work on cytokines is relevant to diseases caused by dysregulation of the immune system like rheumatoid arthritis and asthma. Because cytokines stimulate stem cells to generate white blood cells, through a process that involves extensive cellular proliferation, our research is also relevant to leukemia. Indeed, because of the similarities in the molecular processes that control cells in all tissues, our work is also relevant to cancers like breast cancer.

Germline V-genes encode key structural features of protective antibodies against human cytomegalovirus (HCMV) and the pneumoccus. HCMV chronically infects most healthy humans, but can cause serious intra-uterine infections in the fetus and life-threatening illnesses in immunocompromised individuals. We used our novel method to generate a series of human monoclonal antibodies against HCMV that bound a critical site on HCMV and neutralized its ability to infect cells. Surprisingly, all known human antibodies against this part of HCMV, even those generated from different individuals, are encoded by genes derived from the same pair of germline IGHV and IGKV genes. Given that these particular germline genes are well-conserved and are present in all humans, we hypothesized that they had co-evolved with HCMV, to enable humans to generate germline-based, primary immunoglobulins antibodies that would bind HCMV and trigger subsequent somatic mutation and affinity maturation. This would increase the chance of generating high-affinity neutralizing antibodies against this potentially damaging virus. To test this idea, we recreated the hypothetical germline-based encoded antibodies, and confirmed that they indeed bound the HCMV epitope. Moreover, the genome of chimpanzees, which are infected with a co-specifically evolved relative of HCMV, contains IGHV and IGKV germline elements that are almost identical to those we identified in humans. We postulate that these genetic elements have been selected during primate evolution to ensure the reliable generation of antibodies that neutralize CMV, provide an innate foundation for the subsequent adaptive immune response. In collaboration with Dr Emil Pai of the University of Toronto, we have compared dimensional structures of these germline-based antibodies and their somatically mutated, high-affinity progeny. These studies indicate that many of the amino acids that make important contacts with the antigen are encoded by germline V-genes. Moreover, somatic hypermutation and affinity maturation did not result in new side-chain contacts, but instead stabilized these germline-encoded contacts. Thus, these germline V-genes provide a pre-adapted foundation for the generation of primary antibodies against HCMV. We have shown that the same pair of germline IGHV and IGKV genes is also used in primary immunoglobulins that bind a sero-type of pneumococcal polysaccharide. Dr Pai has obtained crystallographic data of complexes of a Fab fragment and a pneumococcal polysaccharide subunit that indicates that germline-encoded amino-acids contact the antigen. This suggests that this pair of IGHV and IGKV genes may have evolved under selective pressure from multiple pathogens.

M-Ras Our work on the cytokines and the regulation of hemopoietic cells uncovered a novel protein, M-Ras, which is activated by many cytokines and is involved in some of their effects on cellular proliferation and survival. M-Ras is a new member of the Ras family of proteins that function as molecular switches that control many important biological processes. We identified M-Ras through bioinformatics approaches and went on to identify its binding partners using yeast-two hybrid screens or affinity-directed mass spectrometry. Activation of M-Ras-mediated signaling pathways in normal bone-marrow stem cells immortalized them and transformed them into cancer stem cells that give rise to leukemias. While expression of activated p21 Ras also resulted in the generation of myeloid leukemias, these resembled dendritic cells. These results raise the intriguing possibility that differences in the signals generated by the two Ras proteins determine the direction of differentiation taken by stem cells. We are investigating these ideas using transgenic mice and M-Ras knockout mice. We are also following up on clues that M-Ras may play a critical role in breast cancer and other human cancers. Expression of activated mutants of M-Ras in a mammary epithelial cell line resulted in epithelial- mesenchymal transition and tumorigenicity in vivo.

Ras and Innate Immunity We are investigating the role of Ras proteins in regulating inflammation, focusing on their role downstream of receptors that sense products of microbes or released from tissues by damage. Activation of Ras is likely to be important in regulating both gene expression and morphological changes in inflammatory cells.

RNA-binding Proteins and Immunity While studying the M-Ras pathway, we serendipitously discovered a novel RNA-binding protein that increased in levels when resting T- or B-lymphocytes were activated. We used mass spectrometry to identify the protein, which we call Caprin-1. Caprin-1 is also expressed in all dividing cells as well as in the brain. We have shown using gene-targeting that Caprin-1 is essential for normal cellular proliferation and used proteomic approaches to identify its binding partners. We showed that Caprin-1 heterodimerizes with an RNA-binding protein that has been associated with the Ras pathway, called G3BP-1. We have shown that Caprin-1 also selectively binds mRNA that are involved in cellular proliferation and other processes. We are investigating the physiology of Caprin1 in the immune system.

Ehrhardt, A, David, M, Ehrhardt, GRA, and Schrader, JW. Distinct mechanisms determine the patterns of differential activation of H-Ras, N-Ras, K-Ras 4B, and M-Ras by receptors for growth factors or antigen. Molecular and Cellular Biology. 24:6311-23 (2004) 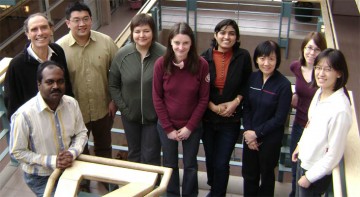